Community forestry in Central Africa: Has it been a success?

Democratization across much of Africa in the early 1990s not only affected political institutions, but also had repercussions for natural resource governance. Participatory management has since become the standard for measuring a state’s progress toward sustainable natural resource management (and in particular, forest management), due to its inclusive nature and its status as the preferred approach for non-governmental organizations and the international donor community.

In a new book, titled ‘Inclusive management of the Congo Basin forests: From participation to power-sharing’, 30 experts explore the literature and present their personal experiences in community forestry in Central Africa (available only in French).

In one example, research conducted in Cameroon shows how community forestry is still far from reaching its targets despite the various types of support that the country has received from technical and financial partners. Factors found to prevent optimal results from community forestry operations include: unadapted regulations, complex administrative procedures for acquiring forest land and high exploitation costs.

A model for the future?

In community forestry, participatory management seeks to give village populations access to a forestry sector that has long been monopolized by multinationals, and in doing so restore equitable access to revenue. This model, called the ‘community forestry model’, in theory is meant to compensate for the shortcomings of industrial logging concessions with regard to participation and poverty eradication in rural areas, although there have been improvements in the development of communities neighboring forest concessions that are certified by the Forest Stewardship Council (FSC).

In its present form, the ‘Cameroon model’ of community forestry, which is being adopted in Democratic Republic of Congo, is not a profitable model for the local population and has become an avenue for fraudulent timber exploitation. Furthermore, the initial concept has been reoriented to ensure that it benefits the political and the administrative elite, who often pay the operating costs.

In terms of income or environment, it would appear that local populations are not benefiting much from community forestry operations.

Although communal forestry is still in its infancy with very little control over its potential, it is emerging as a model for the future in Central Africa, as part of a global development for rural entities and for sustainable forestry management, which is attracting the attention of technical and financial partners.

Says Raphaël Tsanga, one of the book’s authors: “Communal forestry in Central Africa is an opportunity for forestry management that reconciles the development needs of local communities and the objective of sustainability of resources.”

On this subject, Tsanga says: “The notion of communal forestry is appealing, not only because of the related opportunities for local development, but even more so because the international economic setting and the sub-regional dynamics are amenable to global discourse on climate change and the potential role that the sub-state public entities can play in the implementation of processes such as REDD+.”

The main challenge that communal forestry in Central Africa will have to face is the matter of legitimacy. There seems to be a clash between two incompatible approaches to the meaning of decentralized forestry management, namely a ‘community-based’ definition stemming from the local community, countered by a ‘state-based’ concept that is founded on decentralized territorial units.

The first option favors social forestry rooted in local mores, but without any major impact on the standard of living, or on the state of natural resources. Its financial added value is not clear. On the other hand, this scenario has strong political and symbolic value, since it formally recognizes the role of the community in the use and planned development of rural spaces.

In the second approach, rural zone development is part of a formal decentralization process that institutes a legal entity that is expected to stand for and implement the collective interest. Here, community forestry is seen as a link in this process, even if it means relegating local customary rules and institutions to second place.

Communal forestry has long been the ‘poor cousin’ of inclusive management in Central Africa, except in Cameroon. In other countries in the region, it is limited to being mentioned in legal and regulatory texts but is not implemented (Congo, CAR, Chad) or is expressed in a legal framework that is ill-adapted (Rwanda, Burundi) or inconsistent (DRC).

There are several factors that explain the limited effectiveness of communal forestry: (i) reforms to the forestry sector in Central Africa in the mid-1990s favored industrial concessions and community forests, (ii) the development of communal forests was never a fundamental challenge or stake for Central African states or for technical and financial partners, and, (iii) in countries like Cameroon where decisive experiments have been carried out, the relatively high cost of the forest acquisition process has prevented many decentralized territorial units from adopting this management system independently.

At the end of the day, communal forestry operations are carried out at different speeds, using different methods from country to country. 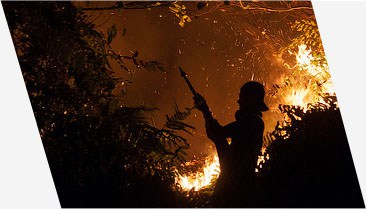 Increased deforestation and road building in Central African rainforests will intensify threats to the lives and lifestyles of indigenous Pygmy communities, a new study suggests.

The study, which provides the first measured estimate of the population and distribution of these increasingly marginalized indigenous groups, found that the forests of the Congo Basin could be home to up to 920,000 Pygmies.

Until now, it has not been possible to determine the numbers and actual geographic ranges of Pygmy communities, because of their location in remote forest areas, mobility, lack of census data, and imprecise and partial sources of information.

“Pygmies are of great significance to humanity’s cultural diversity, as they are the largest group of active hunter-gatherers in Africa, and possibly the world,” said one of the study’s leaders, John E. Fa from Manchester Metropolitan University and senior research associate with the Center for International Forestry Research (CIFOR).

“Yet this was the first study to use robust scientific methods to predict how many Pygmies are likely to be found in the vast expanse of tropical forests in Central Africa,” he added.

Pygmy communities live in rainforests across nine countries in Central Africa—an area of some 170 million hectares—where they make up a very small minority of the total population. They identify closely with the forest and many still depend largely on wild forest products. Most Pygmy groups move around, for social and nutritional reasons, within a specific territory or group of territories to which they have affiliations through clan or marriage relations.

As well as giving the best estimate of populations to date, the study maps Pygmy communities’ distribution, and identifies which areas are of ecological importance for them.

In particular, the researchers found that Pygmy communities prefer to live in rainforest areas, away from roads. By contrast, those settlements in unfavorable areas—that is, those with less forest cover—do tend to be along roads.

“What our research indicates is that Pygmy settlements in roadside areas—who were often relocated there in government programs—are in conditions that are environmentally suboptimal for them,” Fa said.

“This is hardly surprising, given that roads can have an array of deleterious effects on tropical forests and their wildlife, and particularly in diminishing hunting resources.”

View all the top stories and analysis from 2015 Read

The authors note that Pygmy groups that have been relocated as part of official sedentarization programs set up by governments may have failed to adjust to the new living conditions, often with severe consequences to their way of life.

Reasons for displacements may range from relatively indirect causes—such as deforestation for agriculture, logging or mining—to forced displacement under programs that, according to the study, “impose European development models which argue that indigenous groups and the protection of areas for nature conservation are incompatible.”

“This is a very underprivileged and neglected group of people, many of whom have already lost their forest land and livelihoods and whose rich cultural traditions are seriously threatened in many regions,” said Jerome Lewis, an anthropologist at University College, London, who has worked extensively with Pygmies and supported them to better defend their rights.

“Information on their locations and population numbers are crucial for developing appropriate human rights, cultural and land security safeguards for them, as for other indigenous peoples,” he added.

Understanding the nature and extent of the threat to this already marginalized group was a major motivation for the involvement by what is an unprecedented number of researchers for this type of study: evidence was provided by a total of 26 contributors, including anthropologists, conservation biologists and biogeographers from the USA, Canada, Europe, Japan and Cameroon, active human rights groups, and bilateral and livelihood organizations.

“Thanks to the information provided by these contributors, we were able to generate what is now the largest-ever database of the locations of Pygmy camps,” Fa said.

In the absence of any known accurate censuses of Pygmies, the researchers predicted where they live by using statistical methods, developed by Jesús Olivero, an expert biogeographer at the Biogeography, Diversity and Conservation research group of the University of Malaga in Spain, and his team. The techniques were based on species distribution modeling (SDM) methods that investigate the relationships between environmental conditions and the distribution of organisms.

The study is the first to apply this method to human societies and their cultural diversity.

“By using tried and tested animal and plant distribution models, we hope to raise greater awareness of the importance of these too often ignored and marginalized groups in this region,” Olivero said.

“Pygmy communities depend on the forest but their access to forest areas is becoming increasingly difficult because of industrialization and the expansion of market-led initiatives, displacement, forced sedentarization, disease and deforestation.”

Understanding where and how Pygmy communities live is an important first step in supporting them and safeguarding their rights, Fa added.

“It’s important for all of the countries involved to come together to help support Pygmies’ cultures and human rights to make sure they are respected and understood,” he said.

“At the end of the day, 900,000 people living in small groups in such a vast area can very easily be ignored, leading to their cultural extinction, and given the extraordinary role they have played in the human story since well before antiquity, we don’t want that.”

Related:
‘Concessions 2.0′: A new concept for sustainable community forestry
To invest in data is to invest in our forests
When are satellite images most useful? When someone explains them