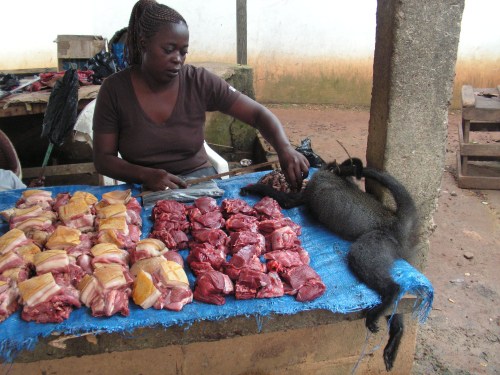 BOGOR, Indonesia–An innovative new model has mapped the potential sustainability of bushmeat hunting across the Congo Basin, shedding light on where more resilient species exist—and where certain species are at risk of extinction from overhunting.

The importance of bushmeat to the diets of rural people has come into the spotlight in recent months due to the potential links between bushmeat and Ebola virus disease, which has killed thousands of people this year in parts of West Africa.

Until now, we have been hunting a big animal, if I may use that analogy, with a pea-shooter

But when it comes to bushmeat, a more pressing long-term challenge than disease, many scientists say, is the viability of the species being hunted. Overhunting has decimated certain species in areas of the Congo Basin, leading to concerns of “empty forests”—and empty stomachs. Any attempts at evaluating the presence and sustainability of hunting over such a large area have been small and scattered.

In terms of gauging bushmeat sustainability, “until now, we have been hunting a big animal, if I may use that analogy, with a pea-shooter,” said John E. Fa, a professor at Imperial College London and linked to the Center for International Forestry Research’s (CIFOR) Bushmeat Research Initiative, led by Dr. Robert Nasi.

“We needed a bigger gun.”

So Fa and scientists from the University of Málaga and CIFOR created a complex model to assess—and map—the “potential hunting sustainability” for nearly 200 species of mammals. The model does not rely solely on data on species’ typical range—such data is fairly incomplete and fragmented, according to Fa—but instead employs a complex array of variables to determine a species’ geographic “favorability,” that is, where the environmental conditions are most adequate to the thriving of that species.

Their model, detailed in a recently published paper in PLOS One, found distinct “hot spots,” with high levels of mammal diversity, as well as “weak spots”—areas where there are more species vulnerable to overhunting, determined by a combination of biological characteristics of each species and the distribution of these within the different habitats. Armed with such knowledge, policy makers and practitioners could design management rules helping to protect species and the people who rely on them for their nutrition.

Fa spoke recently with Forests News about the paper, the first of several studies that his team is planning to publish on this topic. An edited transcript of his interview follows.

Question: What kinds of species did your study assess the potential hunting sustainability of, and why?

Answer: The study only included mammals. Unfortunately, there isn’t data for other species like birds and reptiles. We know a lot about mammals, but we also know that crocodiles, for example, are very much affected by hunting in this region.

Mammals make up over 90 percent of all bushmeat hunted in Central Africa. It’s a bit of a double-whammy: We have lots of data on mammals, and mammals are also incredibly important in the supply of animal protein to countless numbers of people on the continent.

Q: The study focuses on the “favorability” of species rather than “presence” of a species. Can you tease out the distinction between these two concepts?

A: Favorability modeling is a distribution model that allows you to assess the relationship between the presence of an animal and the environmental conditions that it is in. It is slightly different from what people have been using up to now. The statistical models we have used in our study differ from those commonly used and give us a methodological edge that can allow us to go further in our understanding of hunting sustainability in Africa.

It provides us with an idea of where a species is more likely to survive better than in other areas. So the maps that we generate through each one of these species—almost 200 of them—give you an idea of where each of these species is “best off.” Favorability is another way of saying there’s a good association between environmental variables and the presence of a species.

Q: Your paper describes three kinds of areas with respect to mammalian bushmeat species: “Hot spots,” with high levels of mammalian presence and diversity; “weak spots,” or hot spots that are vulnerable to overhunting; and “strong spots,” areas with high levels of very resilient species. Can you talk about the respective locations of these “spots”?

A: The important thing is, when you look at the map, you can see that the most important areas in the Congo Basin are two areas on either side of the Congo: A chunk of very important areas in Western Africa, around Gabon and Cameroon, and another block of very significant areas in the eastern Congo Basin, that has high diversity but also weak spots and strong spots there. That’s a major finding: The fact that we have these very clear areas that nobody had ever found before.

Q: Given the complex nature of your model, who would be able to use the findings from this study, and how?

A: Not everyone needs to master the intricacy of our modeling approach to interpret the results and to design proper management rules. We want researchers and others working on sustainability issues in bushmeat hunting to take note of our findings. At the moment, there are no macro-ecological analyses of the issue of hunting. It’s easy to write a paper that works on a particular village, on the hunting in a particular community, that shows that so much a species is hunted every year, and so forth. But it doesn’t give you an appreciation at the level that we want, which is a regional understanding of hunting sustainability.

What the study of bushmeat requires, in my opinion, is these much larger scale analyses of what’s happening on the ground. We’re dealing with very complicated issues to do with how you define areas of sustainability. This is novel. I’m quite prepared for critiques that our approach is dense, or even over-engineered, or why do we need these kinds of analyses to understand what we already know is happening. My answer is quite clear – real-world problem solving requires both empirical data as well as sophisticated analyses. I do not believe that we should not shift gear, and stay at the less-complicated level, just because it is complicated. The techniques and technical knowledge are available to allow us in the field to proceed at a much faster pace.

This paper is “setting the scene” for future papers that are more bio-geographical but which allow us to look at problem at broad geographical levels.

Q: Did the findings conform to what you had expected?

A: They very much surprised us. No one had done this sort of work before. Nobody knew where these particular “weak areas” were in the Congo Basin.

Our findings showed this manifold distribution of weak spots, and that there are two areas in particular that are very susceptible to extinction of species if overhunting continues. We didn’t expect to find such a clear pattern. These areas shout out for better protection since these contain more vulnerable species. It doesn’t mean the rest of the Congo Basin shouldn’t be looked at, just that these are the weak spots.

Q: Did you find a correlation between human population density and “weak spots”?

A: This is coming in a future paper. What we have found is that areas that have species that are highly vulnerable to extinction – large, slow-reproducing species such as elephants, primates, and the like – are found in areas of low human population density. Therefore, we have a glimmer of hope.

You’ve got a lot of meat, but because there are so many people in the area, that meat dissipates very quickly.

A: Our results frame the problem of hunting and vulnerable fauna in central Africa. We show the big patterns from which you can then focus on areas that are vulnerable to species extinctions and impact on people’s livelihoods. Our study, which will be published in a subsequent paper, shows there is a clear link between fauna and protein nutrition of humans. Because we can actually delimit, which we weren’t able to do before, those areas that require a joint effort from development scientists as well as wildlife biologists, we are now able plan for actions that protect both wildlife and assist people’s livelihoods.

This is often the problem: Often those working on people-based issues have a particular way of looking at the world, and wildlife biologists have another. We need to bring them together, and I think by using these maps, we can help in achieving this.

Having said that, I think we do need to interpret and translate the results of these papers. What we will do is try to bring all this information, once the papers are out, to come up with a strategy for the conservation of both people and wildlife in these areas.

Q: Is there hope that this could be used in a way to decriminalize bushmeat hunting?

A: Enforcement has to go hand-in-hand with any scientific analyses. You can’t do any proper conservation without the right people on the ground. All we can do with our data is say, these are the strategic areas and possible directions for work on the ground. This information allows you to come up with a strategy where you can combine wildlife conservation as well as human conservation.

This is just the first stop on the road to achieving more.

Q: Could this model be replicated elsewhere?

A: Indeed, it can and I hope it will be replicated in other places like the Amazon Basin—the methodology is well-developed.

We are now in the process of writing and publishing the full suite of papers, after which we will disseminate our results, and importantly also translate our results to those operating on the ground. I am totally convinced that our approach will further support the valiant work that many involved in sustainability science and human development are undertaking.

For more information about this research, please contact Robert Nasi at r.nasi@cgiar.org.

This research was supported by the KnowFor initiative of the UK Department for International Development, and forms part of the CGIAR Research Program on Forests, Trees and Agroforestry.