Obstacles to forest tenure reform deeply rooted in the past 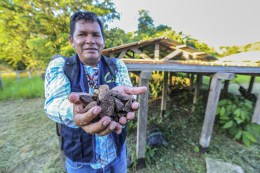 Ask people what ‘community forestry’ is, and you are likely to get different answers in different countries, or even in different parts of the same country.

Each country’s forest tenure system has its own history, and understanding the past can help governments and communities design more equitable tenure systems in the future, says Anne Larson, a senior scientist at the Center for International Forestry Research (CIFOR).

The chapter is based on results of a global comparative study of forest tenure reform, and highlights two countries: Indonesia and Peru.

“Our study shows the progression of challenges and breakthroughs in securing rights to indigenous or communal lands,” Larson adds. “That helps us understand how the current situation came about and identify the challenges that remain.”

The evolution of community tenure

Nearly three-quarters of the world’s forests are considered public property, but indigenous and traditional communities have a long history of customary use. Conflicting claims over forests have caused tension, however, and governments have responded with various types of reforms, particularly since the early 2000s.

Between 2002 and 2008, there was a strong effort to return rights to communities, but the push slowed between 2008 and 2013, according to data from the non-profit Rights and Resources Initiative.

The greatest advances were in low- and middle-income countries, where the amount of government-owned land designated for indigenous peoples and communities doubled between 2002 and 2013, though only from 3% to 6.1%.

The largest proportion of forests owned by indigenous peoples and communities is highest in Latin America, at 32.9%, followed by Asia with 30.6%. Africa has virtually none.

Historically, forests have been seen as a public good, and governments have reserved the right to manage them. But studies show that the benefits often go to the elite, rather than being shared equitably.

In both Peru and Indonesia, traditional communities depend on tropical forests for livelihoods. And although the two countries have taken different approaches to forest tenure, they face similar challenges, according to the authors.

In Peru, legislation in the early 1970s recognized indigenous communities and communal property in the Andes Mountains and the Amazon region. Another law followed, however, that rescinded communal ownership of forests, instead granting the right to use the forest and creating different tenure systems for agricultural and forest land.

Traditional communities have gained title to more than 34 million hectares, while another four million have been designated ‘communal reserves’ for indigenous communities. About 33 million hectares are still pending titling, a process that has been largely stalled since 2008.

Forestry laws passed in 2000 and 2011 sought to organize the sector, classify forests and combat illegal logging. Conflicts continue between private interests and communities seeking land title, however, and government officials and business leaders have accused indigenous communities of blocking the country’s development.

Nevertheless, Peruvian communities have tenure to more forests than traditional forest dwellers in Indonesia, where the government still owns and administers the vast majority of forests, and where the population density is far higher than in the Peruvian Amazon.

In Indonesia, centralized government control of forests continued even after independence from Dutch colonial rulers in 1945.

A step toward recognition of customary law with the Basic Agrarian Law of 1960 was reversed a few years later, when the Suharto dictatorship expropriated communal lands, reestablishing central government control and dividing forests between state and private ownership. 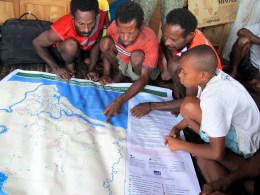 Regulations issued in the 1970s created various categories of forests, paving the way for logging concessions, timber plantations and conservation areas that displaced local communities. Resistance to central control grew during the 1980s and 1990s, and the 1999 forestry law finally recognized several models of social forestry. Even under those schemes, however, the central government still maintained control of forests, granting communities only partial rights.

A 2012 Constitutional Court ruling supporting communities’ tenure claims under customary law laid the groundwork for expanding communal rights, but so far, implementation has been slow.

CIFOR’s research can contribute to the process, according to Mani Ram Banjade, one of the authors of the chapter, who is leading the CIFOR study in Indonesia.

“We are considering all types of reforms in our research, taking cases from social forestry schemes and informal customary systems,” he says.

Communities and policy makers can use the results of the comparative study to learn from experiences in other areas, he adds.

In both Peru and Indonesia, progress toward community rights has been uneven; sometimes promoted by sympathetic officials, sometimes by social movements, and often marked by reversals or foot-dragging, the authors note.

Although Indonesia’s efforts at communal tenure came later than Peru’s, “the people in the two countries have similar challenges in terms of both rights and security of rights and livelihoods,” Larson says.

As they demand greater rights, traditional communities in both countries will continue to face resistance from government officials and corporate managers who consider them obstacles to development, and sometimes from conservation groups that blame traditional agricultural practices for deforestation.

“Overcoming these obstacles to securing community rights requires coalitions for change and a clear understanding of the roots of opposition,” the authors write.

Communities are taking on a stronger role by designing plans for the future that include sustainable use of natural resources on their lands.

“What we’re really talking about is a new paradigm of development, a new paradigm for the future, to address climate and livelihoods,” Larson says. “There are big questions, and the answers have to come from communities themselves, as they decide what lifestyle they want.”

For more information on this topic, please contact Anne Larson at a.larson@cgiar.org or Esther Mwangi at e.mwangi@cgiar.org.
This research forms part of the CGIAR Research Program on Forests, Trees and Agroforestry.