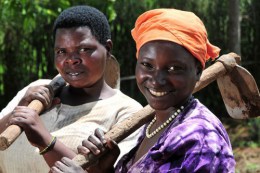 Can field-based practitioners use Adaptive Collaborative Management (ACM) as an effective way to enhance women’s participation in natural resource management?

This question was raised during a recent workshop held in Uganda, which brought together NGOs and forestry sector stakeholders from the local government and National Forest Authority.

ACM is an approach whereby stakeholders who share an interest in a common natural resource agree to act together to plan, observe and draw lessons from the implementation of their plans. It is characterized by conscious efforts among such groups to communicate, collaborate, negotiate, resolve conflicts, and seek opportunities to learn collectively about the impacts of their actions.

Since 2011, scientists from the Center for International Forestry Research (CIFOR) in partnership with the non-governmental Association of Uganda Professional Women in Agriculture and the Environment, have used the ACM approach to implement forest-related activities in six study sites across three districts in Uganda, in order to measure its impact on empowering women and strengthening their involvement in the management of forests and trees.

The results are impressive.

After almost six years of implementation, study results produced by CIFOR show that interactions between men and women group members at the household level have improved. Previously, husbands did not allow their wives to plant trees. But today, men are allowing women to plant trees on family farmlands.

Before the ACM intervention, only five women across the study sites owned woodlots. Now that number has jumped to 32. Five women have also sold trees from their woodlots, making decisions on when to harvest and how to use the income from sales.

The number of trees planted by women on-farm totaled 5,896 across the six communities involved in the project. Two communities in the Collaborative Forest Management (CFM) partnership planted 2,645 trees on forest reserves. This is a significant jump from the estimated 350 trees owned by women prior to the ACM project. Seedling survival rates are high at 80%. 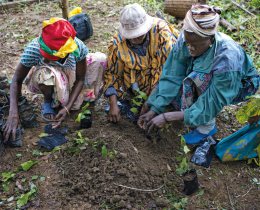 The number of women in leadership positions has also increased significantly, by a factor of 18. Prior to the ACM imitative, only two women held leadership roles compared to the current 36.

Moreover, the number of women attending community meetings remained steady compared to the declining attendance numbers by men and youth. The average attendance per monthly meeting is nine men and 14 women, totaling 23 out of the overall membership of 47 members.

Increased participation in discussions by women has changed the once male-dominated meetings to a more balanced forum where women’s interests and preferences are taken into account.

In the national election of 2015, 18 women vied for village and sub-county level political leadership positions; compared to only 2 who had attempted to do so before the ACM intervention.

One woman, Ms Mbatudde, attributed her decision to stand for political leadership to the fact that she gained leadership experience in the ACM group where she had been in charge of nursery operations. She mobilized members for action, was trained in leadership skills, and is presently a co-community facilitator in the gender project. Another woman, Ms Nalule, was chosen as a chief in the Buganda kingdom, a cultural institution. She is also the group’s counselor.

Yet some challenges remain for ACM.

For one, the approach can be pricy to implement. “If it was in my power, I would take on ACM methodology tomorrow,” said Polly Birakwate, District Forest Officer of the Mpigi district local government. “Unfortunately, the Forestry Department that I head receives only 0.2% of the District’s , which is hardly enough to purchase fuel for one motorbike per year. ACM implementation requires a much larger budget to allow frequent interactions with the communities.”

Despite this, workshop participants hailing from districts where ACM has not been implemented showed a keen interest in adopting the method. They asked for a simple ACM guide to be produced, and for CIFOR to publicize the method through local media channels, such as FM radio stations.

“The results of the ACM methodology are real and interesting since the community members involved are here to testify. There is need for it to be more publicized for policy makers both at national and local government levels to make decisions favorable for its uptake,” said Paul Buyera, the Director of Corporate Affairs for the National Forestry Authority.

Similarly, Bob Kazungu, the Senior Forest Officer with the Forest Sector Support Department of the Ministry of Water and Environment, said that the second phase of the Farm Income Enhancement Forestry Project will definitely use ACM methodology to make sure women fully participate and benefit from the project.