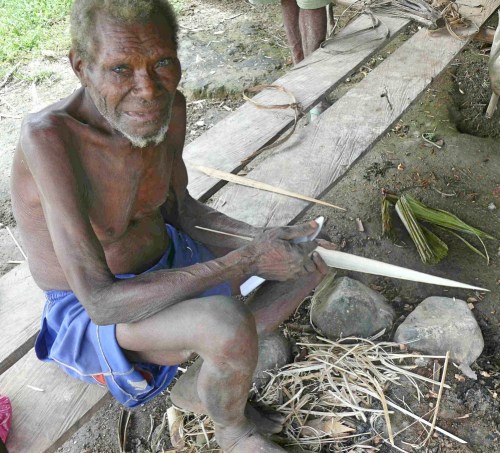 A CIFOR study has found that in the Mamberamo-Foja Wildlife Reserve, communities maintain their own claims, customs and rules governance. These largely invisible customs play a vital role in the way communities both perceive and respond to threats in their territories. Mamberamo Raya Papua man. Photo:Michael Padmanaba/CIFOR.

Late last year there was publicity about the plight of the San (bushmen) of the Kalahari in Botswana – part of a growing number of ‘conservation refugees’ from across the world who have been forcibly evicted from large areas of land set aside for national parks and protected areas.

As was the case with the San, the decision to relocate communities is generally poorly informed. It is based on the assumption that indigenous communities invariably over-use, damage and threaten natural resources.

It also ignores a growing body of research, including our recent study, which shows the protection and management of natural resources by local communities, though often unrecognized, can often be more cost-efficient and effective than government sanctioned protected areas.

Why then, given the potential wins for both conservation and livelihoods, are opportunities for collaboration between indigenous groups and conservationists not being realized? As researchers, are we doing enough to demonstrate that local communities can and do protect and manage natural resources effectively?

The monitoring of resources – a process whereby threats are identified and assessed – is a fundamental aspect of natural resource management.

All indigenous communities to some extent manage their resources, however all respond to threats in some manner.

While researchers acknowledge the former it remains little studied and even less is known about the latter. In particular, how do communities perceive and respond to threats in their territories; what specific tools, and systems they use to adapt, and more importantly for conservation, whether these practices are actually effective in preventing resource exploitation.

Our recent study in the Mamberamo Raya regency in Papua, Indonesia, provides some interesting answers.

Spanning over two million hectares, the Mamberamo-Foja Wildlife Reserve is one of the most biologically diverse in Indonesia, but not managed by the region’s overstretched reserve authorities.

As well as outside threats from logging, oil palm development and mining, the park overlaps many communities including Kay, Metaweja and Yoke where we conducted our studies.

Despite being aware of the reserve’s protected status, all three communities maintain their own claims, customs and rules governing these areas. They also hunt crocodiles and pigs, fish, and collect forest resources.

The study revealed that rather than leaving a trail of destruction, these largely invisible customs and practices play a vital role in the way communities both perceive and respond to threats in their territories.

For example, rather than leaving areas vulnerable to exploitation, respected individuals or groups have a recognized responsibility for protecting key resource-rich areas.

In Kay, hereditary guardians or ‘ljabait‘ live at a number of locations along the Tariku River, while in Yoke, one family oversees access to the most prized fishing area, Lake Tabaresia. In Metaweja, territorial protection was a shared responsibility.

The village men regularly patrolled areas where resources were deemed to be vulnerable or where there were high levels of distrust with neighboring communities.

Although all three villages reported encroachment and illegal hunting, incidences were rare and fines and punishments rarely used. The study showed that rather than leading to unrestrained exploitation the presence of specific individuals/groups at strategic sites acted as a powerful deterrent for outsiders wishing to exploit resources.

As well as adapting to threats from ‘outsiders,’ the communities were skilled in assessing and interpreting vulnerable resources in their own environments.

Many looked for signs of resource scarcity, and rather than exploit those resources further, they adapted their hunting and harvesting patterns to allow recovery. For example, in Kay, crocodiles are prized for their skin and meat. When flash light observations by local community members revealed population numbers were low, hunting was stopped or reduced.

Likewise, wild pig hunters in Metaweja often discussed details of the kill, including the location, prints, nests and ease of the hunt to other community members. This enabled them to identify which areas would be allowed to recover, thereby improving pig hunting in the future.

With the livelihoods of local communities so dependent on resources, the concept of ‘trust’ was an underlying factor in preventing resource exploitation. As noted by communities in Yoke, even if individuals did take something they should not, the ability to ‘track’ human activities, such as boat marks and footprints, meant inappropriate behavior was hard to conceal. Sanctions or punishments could be imposed, but these were rarely used.

In Metaweja, hunters from a neighboring community were intercepted while collecting birds of paradise and ordered to pay a $550 fine. The hunters left but the fine never collected. It seems that public shaming and informal rules are enough to deter potential exploiters.

However, community monitoring did have its limitations. Informal controls weren’t always effective.

Community members in Metaweja noted that despite a ban on the use of nylon fishing nets and poison in local rivers, some community members continued to do so, with some calling for much stronger controls to be applied. The lack of enforcement at the time of our study suggests that the depletion of fish stocks was not viewed as a significant threat because fish is not considered a vital resource. Resources are therefore not always deliberately misused. Communities place different values on different resources, which are likely to affect the extent to which they are monitored and protected effectively.

Monitoring has become a major theme in natural resource management, with more research exploring the opportunities for community participation. Our Papua study provides some much-needed evidence that local monitoring does contribute to the effective protection of resources and deters unregulated exploitation.

For conservationists pushing for the expansion of protected areas, the study highlights the potential dangers of alienating people from their environment. Although monitoring practices are not always perfect, and are often motivated by distrust of local communities rather than environmental concerns, it demonstrates that as long as people are connected to their land, they are much more likely to protect resources.

Furthermore, rather than being hostile to change (often a justification for excluding communities from decisions regarding the management of national park resources), communities showed themselves to be extremely flexible, adapting their behaviors to new challenges and opportunities.

With many national parks underfunded and overstretched, recognizing local monitoring processes inside and outside these parks is vital to help us understand the ways in which indigenous communities can be most effective in ‘filling the gaps’.

This would allow park authorities to improve protection, whilst channeling scarce funds to where they are needed. Therefore rather than replacing local management systems – which could prove costly for both people and wildlife – we must find ways to strengthen them. We must also identify local concerns and practices to better align conservation and livelihood objectives.

As researchers, our challenge is to help describe and characterize these often informal and forgotten systems, and provide evidence of their effectiveness.

The case of the Kalahari bushmen in Botswana is just one example of indigenous communities across the world who are struggling to live with the rules imposed on them in the name of ‘conservation’.

However, it is us who benefits from the food, clean water and pure air their landscapes provide. We must work together and seek their consent to provide an ethical foundation on which to meet long-term conservation goals.

After all, they are the last guardians of our natural world. Without their support, there would be little left to protect.

Douglas Sheil is senior associate at CIFOR and a scientist based at the Norwegian University of Life Sciences. Douglas can be contacted at Douglas.Sheil@nmbu.no

Manuel Boissière is a scientist CIRAD, seconded to CIFOR and based in Bogor. Manuel can be contacted at m.boisseire@cgiar.org

Guillaume Beaudoin is a scientist based at CIFOR in Bogor. Guillaume can be contacted at g.beaudoin@cgiar.org